There is no mistaking the cassowary for any other bird. With glossy black plumage, a purple and blue neck and red wattles, its head crowned with a distinctive casque or helmet, this bird is a survivor. It is an evolutionary relic, having first appeared millions of years ago, and is believed by some to be the closest living relative to dinosaurs.

The cassowary is remarkable in a number of ways. For one thing, the males hatch the eggs and raise the chicks rather than the females. The cassowary also plays a key role in the survival of the rainforest. By eating rainforest fruits and excreting their seeds, it helps ensure diversity. More than 70 species of trees rely on the cassowary for survival.

Just 4000 cassowaries are believed to be left in the wild but you have a good chance of spotting them in various sections of the Wet Tropics Rainforests areas including Mission Beach. Fascinating as they might be, you need to be “cass-o-wary” when exploring their habitat. Keep a safe distance if you’re lucky enough to see one as they can be aggressive, especially if their chicks are nearby. Also, drive cautiously on roads that pass through known cassowary habitats or if you encounter an injured animal, be sure to call 4053 4467 or if in the Mission Beach area Tully Vetinary Services  on 4068 1726.

You can also admire these unusual birds in wildlife sanctuaries; our recomendation is the Bird World in Kuranda, which is 2.5 hours or 167km from Mission Beach  open 9am - 4pm. The facility is naturally landscaped with waterfalls, ponds, exotic and native plants, and replicates the natural habitats of almost 60 species that roam this unique rainforest immersion exhibit. More details can be found on their website: www.birdworldkuranda.com 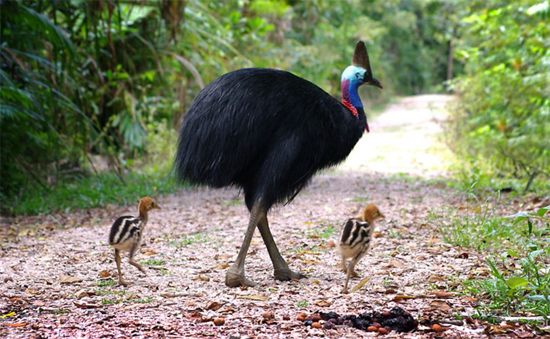